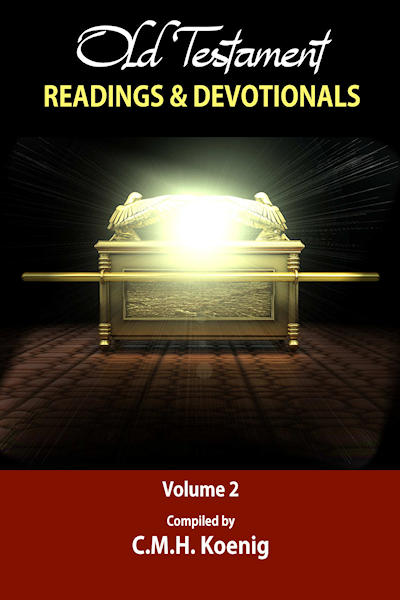 
Buy this publication from one of these retailers:

Old Testament Readings & Devotionals, Volume 2 features Exodus, Leviticus, and Numbers. In addition to documenting the history of the Israelites, these three books also convey the unfolding of God’s spiritual plan for his people: redemption, sanctification, and perseverance, respectively.

The readings and devotionals series compiled by C.M.H. Koenig consists of eleven (11) volumes for the Old Testament and three (3) volumes for the New Testament. They combine a chronological reading plan of the Bible with a related devotional for each “reading.” Each reading is generally one chapter and the associated devotionals are excerpts from Robert Hawker (1753–1827), Charles H. Spurgeon (1834-1892), or Octavius Winslow’s (1808-1878) works. The Psalms are interspersed throughout the Old Testament volumes. The intent of the series is to help us savor the scriptures and, in the words of the Psalmist, to “Taste and see that the LORD is good” (Psalm 34:8, CSB).

I have been drawn to devotionals written by Christians of earlier generations for their gravitas, often poetic beauty, and extravagant praise of our God Almighty. I have found comfort, instruction, and challenges to “walk a worthy walk.” More and more, I wished to have a devotional to read which aligned with a systematic reading of the Bible. But what reading plan to use? A chronological reading of the Bible seemed a logical choice. The more I thought on and reviewed chronological reading plans, the more excited I became. Imagine reading a Psalm directly after the incident in David’s life which prompted the writing of the Psalm. Or reading a follow up letter to one of the New Testament churches after reading about the actual visit to the church in Acts.

The strategy was set, now to find the material. Of the authors I had read, most of the devotionals came from the New Testament. What about the Old Testament? In my search, I came across the following excerpt: “Charles Spurgeon commended Robert Hawker with these words:

"Gentleman, if you want something full of marrow and fatness, cheering to your own hearts by way of comment, and likely to help you in giving your hearers rich expositions, buy Dr. Hawker's Poor Man's Commentary. … he sees Jesus, and that is a sacred gift, which is most precious whether the owner be a critic or no. There is always such a savor of the Lord Jesus Christ in Dr. Hawker that you cannot read him without profit."”

Now this I wanted to check out. The more I read Robert Hawker’s works, the more I realized that a chapter-at-a-time (generally speaking) approach to a chronological reading of the Bible with devotionals was achievable. And, what food for my soul! There were some portions that brought tears to my eyes, tears of joy.

A quick note on the number of volumes. Each volume is designed to be read in about 90 days or fewer. They were initially divided into fewer, but lengthier, volumes. The modest length of the current volumes seems more appropriate and flexible, while providing a sense of accomplishment along the way.

Robert Hawker (1753–1827):
Robert Hawker, a Royal Marine assistant surgeon, Anglican priest, and author, was born 1753 in Exeter, England. He was married aged 19 to Anna Rains, and they had eight children altogether. He was ordained as a minister in 1779. It was in the pulpit that “the Doctor” was best known and loved. Thousands flocked to hear the “Star of the West” preach when he was in London. An Evangelical he preached the Bible and proclaimed the love of God. (Wikipedia: Robert Hawker 2020)

C. H. Spurgeon (1834-1892):
Charles Haddon Spurgeon, an English Particular Baptist preacher and author, was born on 19 June 1834 in Kelvedon, Essex, England. He married Susannah Thompson in 1856 and had twin boys. Spurgeon remains highly influential among Christians of various denominations, among whom he is known as the "Prince of Preachers." (Wikipedia: Charles Spurgeon 2020)

Octavius Winslow (1808-1878):
Octavius Winslow, a pastor and author, was born on 1 August 1808 in Pentonville, a village near London. In 1834 he married Hannah Ann Ring and had ten children with her. He pastored churches in both America and England, spending most of his life in England. He was also known as "The Pilgrim's Companion," and was a prominent 19th-century evangelical preacher in England and America. (Wikipedia: Octavius Winslow 2020)