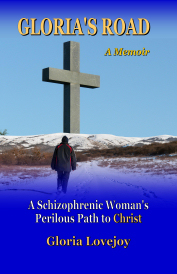 Click click click click click.
My perception of the sound of Pastor Yeager’s shoes on the pavement was far from realistic. To me, it sounded like the Crucifixion, the pounding of nails through the hands of the Lord.
This was the beginning of a nightmare. Everyone in the mental health inpatient unit seemed to be able to read my thoughts.
I described everything as being “muddled.” My symptoms were also manifested in visual misperceptions. One of the other patients, for example, showed me a picture of her cat, which appeared to have fluorescent green eyes that popped out at me . . .

I was born in a small town in Pennsylvania on September 13, 1959, the first daughter in a family that would eventually grow to have three children. I have an older brother I’ll call Johnny; a sister I’ll call Peggy came along four years later. Because my brother and I were closer in age than my sister and I, he and I were closer, period. I remember how awesomely protective Johnny was of me.
I felt an incessant need for attention, which often backfired on me. When I was about three, during my potty-training days, I used to lie down and kick and scream until my mom came and pulled my pants up. Finally, one day, she grabbed hold of me and spanked me. Needless to say, I never did it again. Read More (PDF file)

Doing Business with Us
Getting your Book Published Information for Bookstores